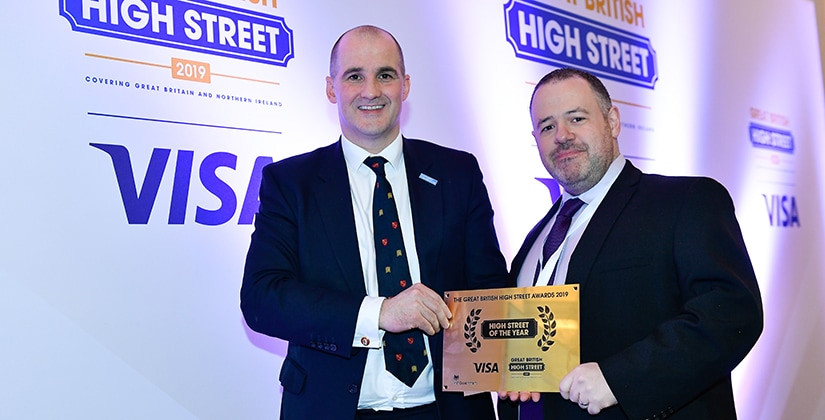 On the 23rd January 2020, it was with great pleasure we announced the winners of the Great British High Street Awards 2019. Hosted at The George hotel in Edinburgh, we congratulated those who had been shortlisted for their efforts, crowned our winners, and celebrated all those who work tirelessly to make our high streets and communities great.

The event was attended by entrants of the Awards in their respective categories, government officials, proud partner Visa, supporting partners and independent merchants as well as our independent judges. The winners were celebrated for all the fantastic work being done in their local communities, supporting small businesses, and working to revitalise their high streets.

We crowned national winners from England, Northern Ireland, Wales and Scotland – in each of the categories; Champion High Street and Rising Star High Street. The Champion Award recognises those high streets across the UK with exceptionally strong local communities, who are leading the way to the high streets of the future. The Rising Star category celebrates up-and-coming local communities who are on their way to transforming for the future. This year was the first year we crowned an overall winner in this category. Read on to find out which high street took the title of Rising Star of the Year and won a £15,000 grant. We also named four High Street Heroes – those exceptional independent business owners or employees who have gone above and beyond for their local high street.

Congratulations again to all of the shortlisted and winners of the Great British High Street Awards 2019, and thank you to all those who have supported the Awards.